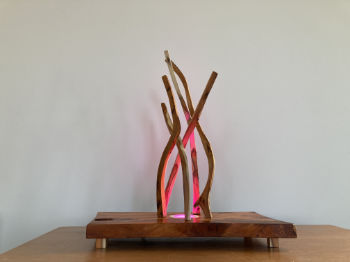 A Reflective piece made from Yew, found in the grounds of  The Chapel in the Fields.

Pruned four years ago and now seasoned these Yew branches form an interesting shape having been trimmed to reveal the beauty and contrast of the sap and heartwood. 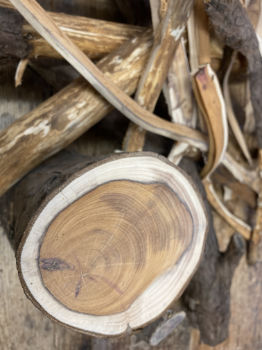 Yew trees have a very long story going back to pagan times, often associated with death, rebirth and sacred places. Yews were planted to in pre-Christian times create hallowed land, and can live for over a thousand years. It would appear that the two yew trees at the Chapel which mark the back corners of the plot, are older than the current building. Could it be that the tradition of marking out hallowed ground also happened here? 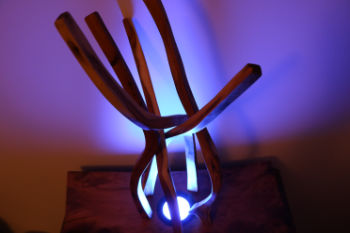 Either way, the myth that surrounds the Yew continued into Christian times. They are well known for regenerating themselves, especially when a low branch touches the ground. It can sprout roots and grow into a new tree. As time passed, the Yew remained a symbol for both eternity and rebirth but also resurrection. 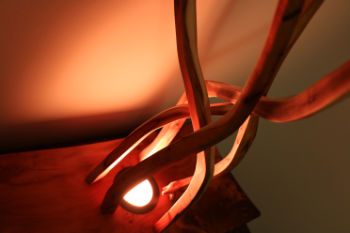 The Yew tree also carries other qualities. The yew’s toxicity has somewhat limited its practical uses to humans, though a homeopathic tincture is made of young shoots. The berry flesh has been used by herbalists to treat a variety of ailments including cystitis, headache and neuralgia. In more recent times scientists have discovered that extracts of yew have anti-cancer properties. The very hard, close-grained wood used in furniture making. But yew wood is perhaps best known as the material from which the medieval English longbows were made.

This piece called ‘Tangled’ made in January 2021 in the midst of a global pandemic reflects something of the myth surrounding the Yew. The source of the raw material is as local as you can get, from a sacred setting in the grounds of the Chapel which has been a place of worship for 150 years. It also speaks of the interconnectedness of the ordinary and with the outer bark removed, the beauty of the hidden grain is revealed. Set against this is the fragility of life especially experienced during the pandemic, where death and suffering have been brought close. Resurrection and hope are represented by the light.